If the foundations are being destroyed, what can the righteous do? (Psalms 11:3 NIV) 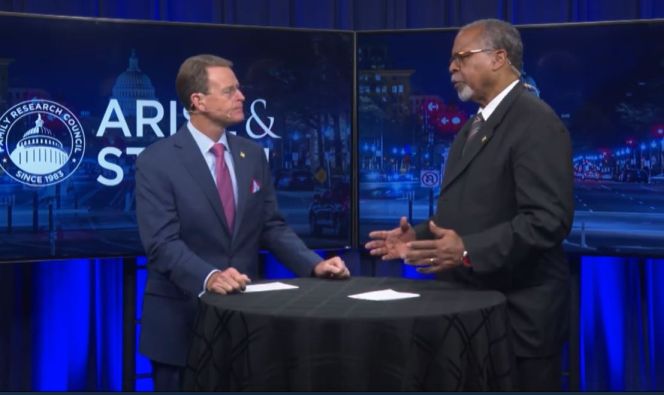 On Monday evening, Tony Perkins hosted an FRC webcast entitled "Arise & Stand." With the present threats to our nation of the pandemic, rioting and destruction, the strategic criminal demolition of America's historic monuments by extremist ideologues and thugs in an effort to erase America's unique history, and shocking new rulings that show Americans are still in danger from an activist U.S. Supreme Court, FRC's Arise & Stand event was thoroughly informative, inspirational, and prayer-filled - both a compelling learning experience and virtual prayer meeting. Here are excerpts:

Before you stand, you need solid ground, you need a firm foundation. We envision an America where human life is valued, families flourish, and religious liberties thrive. Stand for faith, stand for families, stand for freedom!

In the 11th Psalm, chaos and uncertainty confronted David and he asks the question, "If the foundations be destroyed, what can the righteous do?" Those around him said, "Flee like a bird to your mountain;" but David knew he could not run and hide. Too much was at stake. If law and order, the foundation, was destroyed, what would the righteous do? What future, what hope would they have? He responded "The Lord is in His holy temple; the Lord is on His heavenly throne. He observes the sons of men; his eyes examine them." David proclaims, "In the Lord I take refuge."

With the foundations being shaken with protests and riots, with uncertainty spreading like the coronavirus that has created it, with lawlessness breaking out in the streets and courtrooms alike, it is not time to flee to the mountains or retreat into hiding out of fear. It is time to arise and stand--to stand firm on the truth which is the foundation for all just and prosperous societies. The challenges are intensifying. How shall we respond to the lawlessness and cultural chaos?

"The United States of America can and should have nuanced conversations about our complex past. We can and should have discussions about our future. We can and should have peaceful protests, but this lawlessness serves none of that. It is just an alliance of convenience between angry criminals who think it is fun to wreak havoc and a slice of elite society that profits off saying our country is evil and deserves the abuse. Enough! The vast majority of Americans know full well that imperfect heroes are still heroes...that our imperfect union is still the greatest nation in world history. Americans know that our imperfect framers built a nation on moral truths that have fueled improvements beyond anything their generation could have built themselves. We thank God that all kinds of imperfect people have made us a more perfect nation. And when the dust settles, it is never, never the mobs or bullies whom we honor. It is the brave leaders who confront them..." (View the entire Arise & Stand event)

Little did Billy Graham know that when he wrote an introduction to Run Baby Run, former gang leader Nicky Cruz's 1968 biography, his words would describe the very chaos we have experienced in cities across America in 2020. The only hope for those drawn to such criminal behavior then and now is the same. Here is an excerpt from Graham's introduction:

Run, Baby, Run... has all the elements of tragedy, violence, and intrigue-- plus the greatest of all ingredients: the power of the Gospel of Jesus Christ. [Co-author Jamie Buckingham described Nicky Cruz as "warlord of a ruthless street gang, accomplished thief and mugger and vicious cop fighter--all before he turned 18"] ...The adult population can no longer ignore the youth with their staggering, twentieth century problems. They search for meaning. They are not enamored with our time-worn social taboos. They press for sincerity in religion, for honesty in politics, and for fairness for the underprivileged. The encouraging thing about these millions of "new folk" (who will by 1970 outnumber the adult population), they are desperately searching for answers. In my contact with hundreds of students on our university campuses, I am tremendously impressed with their quest for truth, for reality, and for honest answers.

Some of the young people in our ghettos are restless for a fair deal from society, and justly so. Some of them are influenced by advocates of violence and mob rule, and are easily sucked into the vortex of rioting, burning, and looting. Nicky Cruz is a glowing example that restless youth can find meaning and purpose in Christ.

In our crusades nearly half of our audiences are under the age of twenty-five. They do not come to scoff, but in a sincere search for truth and purpose, and hundreds of them respond to the call of Christ... My hope is that [Run Baby, Run] shall have a wide reading, and that those who read shall come to know the Christ who changed the empty, restless heart of Nicky Cruz and has made him a Christian legend in his time. (From Billy Graham's introduction to Nicky Cruz's Run Baby Run)

Praying for the Supreme Court - The Supreme Court's sweeping ruling on June 15, Bostock v. Clayton County, redefined "sex" in the 1964 civil rights laws to mean sexual orientation and gender identity. This was never intended by the framers of that law and it shocked many Americans. But this week's High Court ruling in Medical Services v. Russo which struck down the Unsafe Abortion Protection Act and endangered vulnerable women in favor of the abortion industry, has horrified pro-lifers everywhere. Passed by a bipartisan majority of the Louisiana legislature and signed by its Democrat governor for the protection of women, the law required abortionists to have admitting privileges to hospitals within 30 miles of the abortion clinic in the event of a medical emergency when abortions go wrong, something abortion clinics experience far too often. Chief Justice John Roberts and Neil Gorsuch ruled in favor of Bostock and Gorsuch (but not Roberts) was for the pro-life position in Russo. Roberts defended his position on the basis of the doctrine of stare decisis (precedent must rule). (See Five Justices v. the People; Precedents Day; I Wrote the Law; Another Disappointment; WH Press Secretary; Video of State Senator Katrina Jackson's Response)

I hope you and your church had a great Call2Fall. If your church missed it, talk to your pastor. The Call2Fall can be observed on any Sunday and some pastors intentionally lead their people in a Call2Fall prayer time several times a year. This Sunday would be another great time to observe it. I am in frequent communication with one pastor who observes the Call2Fall every Sunday in his morning services. If you took part in your church or at home, or have a positive comment to make about Call2Fall, please take a minute and post it on Facebook.com/Call2Fall.

Thank you! And as always, thank you for praying! Seriously consider what Independence Day means to America and pray for our nation! Have a great Fourth of July!