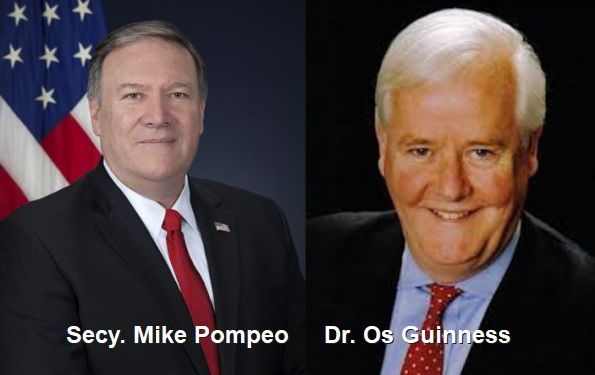 Os Guinness is an author and social critic. Born to medical missionary parents in China during World War II, he witnessed the climax of the Chinese revolution in 1949. Expelled with other foreigners in 1951, he returned to England and received education, earning an undergraduate degree from the University of London and a D.Phil. in the social sciences from Oriel College, Oxford. In America since 1984, he has been a resident or guest scholar at numerous leading institutions (see bio) and has spoken to many of the world's major universities and business and political groups. Author or editor of more than 30 books, these excerpts are from his Last Call for Liberty: How America's Genius for Freedom Has Become Its Greatest Threat, published in 2018. Here are excerpts:

The great American republic is in the throes of its gravest crisis since the Civil War, a crisis that threatens its greatness, its freedom, and its character. As with that earlier time of terrible, self-inflicted judgment, the deepest threat is not the foreign invader but the American insider. The problem is not America against the world, or the world against America, but America against itself, citizens against citizens, government against citizens, one president against another president, and one view of America in radical opposition to another. Americans have become their own most bitter enemies, and even the enemies of their centuries-old republic. Political debate has degenerated into degrading and barbaric incivility...Heedless of the consequences, each side thinks the worst of the other. At the core, the deepest division is rooted in the differences between two world-changing and opposing revolutions, the American Revolution of 1776 and the French Revolution of 1789, and their rival views of freedom and the nature of the American experiment.

The fundamental clash is between the spirit, the heirs, and the allies of 1776 and the ideas that made the American Revolution versus the spirit, the heirs, and the allies of 1789 and the different ideas that made the French Revolution and seeded the progressive liberalism of the Left. The outcome is crucial for both America and the world. It calls into question the American republic as it was founded, and it calls into question the United States as the world's lead society and the champion and exemplar of human freedom for the world. As history underscores, the way of 1789 (aided and abetted by the heirs of 1917, the Russian revolution, and 1949, the Chinese revolution) has led and will always lead to catastrophe for the cause of freedom and a liberal political order, whereas the way of 1776 -- for all its shortcomings -- has led to some of freedom's greatest successes, however much maligned today.

[But] The American republic divided in this way cannot stand. The United States can no more continue half committed to one view of freedom and half committed to the other than it could live half slave and half free in the 1860s. The American experiment was undergirded by the Jewish and Christian faiths, and while never perfect and at times far from perfect, it represents an achievement of the human spirit worthy of celebration and emulation.

On behalf of freedom, America has shouldered a destiny that goes far beyond the bounds of its own shores and own times. And today, when freedom has become almost universally prized but still rare and not easily attained, America stands confidently and defines itself and its mission by freedom alone. More than any other nation on earth, past or present, America celebrates itself as the land of the free, the noble experiment in freedom (George Washington), the fairest Field of Liberty that ever appeared on Earth (John Adams), an empire of liberty (Thomas Jefferson) conceived in Liberty (Abraham Lincoln), with citizens called to be bearers of the ark of the liberties of the world (Herman Melville) and destined to be watchmen on the walls of world freedom (John F. Kennedy). The motto of the state of New Hampshire might well be America's motto too: Live Free or Die. America, Secretary of State Henry Kissinger wrote, is the modern world's decisive articulation of the human quest for freedom. For all America's evils and hypocrisies, Shelby Steele writes, Freedom is still our mother tongue.

Do Americans still believe they can succeed where all other attempts at lasting freedom have failed so far? It is time for Americans to remind themselves what gave rise to their freedom, to assess where they stand today, to refuse the seductions of false freedoms, and to decide what they need to do to restore the health of freedom while they can... If Americans fail to do this, history's stern sentence will be spelled out to the end. Like many a great nation and superpower before, America's experiment in freedom will have been weighed in the balances and found wanting.

Are there enough Americans who care enough to wrestle with freedom and what it requires? To discern the decisive differences between 1776 and 1789? To count the cost of choosing wisely between true freedom and the allure of false freedom? The question is, do you realize where your freedom came from? (Os Guinness, Last Call for Freedom, 2018. Also, don't miss Dr. Guinness's FRC lecture about Last Call for Liberty.)

Dr. Guinness asks and answers many questions about freedom, the founding principles, Scripture, and America's covenant with God and man. Our present crises demonstrate that we have not adequately passed these on to our generation, much less the youth coming after us. America needs a crash course. Our nation is surviving on borrowed time. God gave us 66 books in the Bible and all the Bible history we need to show us that repentance is possible. That is why I share about The Return every time I have an opportunity. There is hope for America, just as there was hope for ancient Judah (Joel 2-3, esp. Ch. 2), but our only hope is in returning to God!

Secretary Pompeo's Speech on Unalienable Rights and the Securing of Freedom -- Last week, Secretary of State Mike Pompeo gave a very important speech at the National Constitution Center in Philadelphia. One year ago, Secretary Pompeo announced the State Department's creation of a Commission on Unalienable Rights,to be made up of a bipartisan group of Commissioners tasked with studying and articulating what the Founders in the U.S. Declaration of Independence called "unalienable rights" (see FRC response). The Universal Declaration of Human Rights proclaimed on December 10, 1948 contained principles borrowed from America. However, over the years, many internal American interest groups have no faith or regard for God-given "unalienable rights," and they have created much confusion at home and abroad. It is time to look at the God-given "unalienable rights" at the heart of the American Republic so that Americans and the nations can know what they mean. Freedom seekers everywhere point to our Declaration as a model to secure liberty in their own, less than free nations, but many Americans young and old do not know them.

Many Americans applauded Secretary Pompeo's speech last week and appreciate the purpose of the Commission, but the negative reaction from the liberal media only revealed how desperately America needs to get back to these fundamental principles and the war we have on our hands. We have been given "unalienable rights" by our Creator, the "right to life, liberty and the pursuit of happiness," but if we forget God, who formed our nation and gave us our rights, we will devolve to become like China, the Soviet Union, or Venezuela whose atheistic revolutionary governments decide what, if any, rights their people will have. Many nations have clouded the meaning of human rights at the UN. America, the freest land in history, is the nation to articulate them. (See "Unalienable Rights and the Securing of Freedom" -- Pompeo's July 16, 2020 Speech; WSJ -- The Left's Rights Distortions; FRC: More Wrongs; Commission Members; July 16, 2020 Draft Commission Report; October 23, 2019 Public Meeting)

Finally, Please read these items and pray over them as the Lord leads you: 1) Prestonwood Baptist Church has opened a pregnancy care center, their second, directly across the street from the largest Planned Parenthood abortion clinic in the metropolitan Dallas area; 2) Fully 74 percent of Americans are against the wanton destruction of statues and memorials that remind us of our national and state history. Read David Closson's The Cancel Culture and the Historical Illiteracy that Fuels it, then pray; 3) Black pro-life believers are taking advantage of the BLM movement, painting preborn Black Lives Matter, too, in front of a New York Planned Parenthood clinic! (Gen 1:26-28, 9:5; Ex 20:13, 23:7; Ps 101:7, 127:3-5, 139:13-16; 6:16-17; Jer 1:5, 9:3; Mt 18:1-6); 4) Marxists are now destroying churches; see FRC's take (see Jn 8:12; 2Cor 11:14; Gal 5:13; 1 Cor 16:17-19; Col 2:8-9; 1 Pet 2:16, 3:9-12; 2 Pet 2:19); 5) Because they have been targeting Catholic Churches, President Trump has promised to prosecute anti-Catholic crimes. No doubt he will do likewise for all believers who are so targeted; 6) CBN reports that former Vice President Biden has said he wants to see more teaching about Islam in our public schools; 7) The Return will be on September 26, 2020.

So much to pray over. Thank God for those who pray and the growing prayer movement in the U.S. and around the world. Thank you for being part of it!