O the depth of the riches both of the wisdom and knowledge of God! How unsearchable are his judgments, and his ways past finding out! (Romans 11:33) 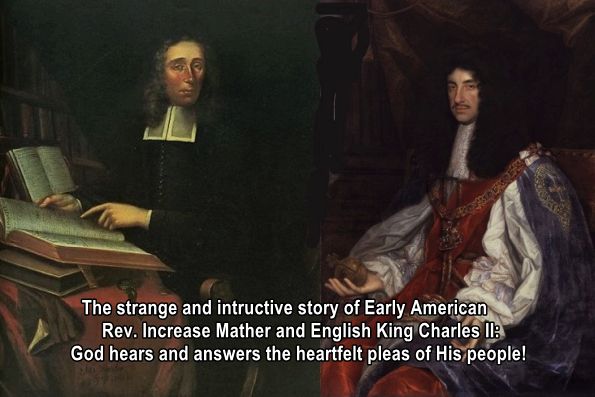 Below is yet another important historical episode from FRC's Vice President for Christian Resources Dr. Kenyn Cureton's collection of Lost Episodes in American History, which so powerfully remind us of God's sovereignty and grace in our nation's history. The faith and courage of our leaders and people who stood strong, courageous, and faithful to God amid the threats in their day were pivotal in fulfilling God's plan for our nation. This year is another pivotal point when "We the People" must stand strong, courageous, and faithful in responding to God's call to return to him and in choosing our nation's leaders on election day. Is God calling us to pray and fast as Increase Mather did in February of 1685, and might God do amazing things to deal with the existential threats America now faces?

Rev. Increase Mather was born on June 21, 1639. Son of Richard Mather (1596-1669), an influential minister who immigrated to Massachusetts in 1635, Increase eventually became the President of Harvard College (1685-1701) and co-authored the Bay Psalm Book. He was pastor of the North Church from which the signal was sent to Paul Revere and the other riders nearly a century later. Rev. Increase Mather became an influential leader in colonial America.

When King Charles II demanded the return of the charter of Massachusetts, Increase Mather argued that to submit to these changes would be "inconsistent with the main end of their fathers coming to New England." Although resistance to the Kings edict would produce "great sufferings, better suffer than sin." He said: "Let us put our trust in the God of our fathers, which is better than to trust in Princes," Mather declared. * Well the leadership of the Colony was persuaded and refused to cow down. Upon that word, the King's lackeys began demanding the Massachusetts Bay Charter in 1683.

In January of 1684, Pastor Mather joined a town hall meeting in the Old South Church, where the Tea Party would be instigated years later. Mather mounted the pulpit and spoke to the voters in favor of resisting the King's edict, citing the biblical example of Naboth who said "No" to King Ahab, who was demanding his vineyard. And the example of David, who wisely "chose to fall into the hands of God rather than the hands of men." If we refuse to submit, argued Mather, "we keep ourselves in God's hands, and who knows what He may do for us?" And he added: "If we submit now, our children will live to curse us." And concluded that none would "dare to be guilty of so great a sin." *

Well the people were persuaded and voted unanimously to reject the King's demand, then they held their collective breaths. When word reached King Charles II, he flew into a towering rage, and laid plans to send Colonel Percy Kirke at the head of a fleet of warships and 5,000 British troops to force the colony into submission. "Bloody" Kirk was the ruthless governor of Tangier, so it would take some time to dispatch Kirke and his force to America.

By the time word leaked to the colony, it was February of 1685.

The moment Pastor Mather heard that the full weight of Britain's military might was about to be deployed against them, he went into his study to fast and pray and seek the Lord. But during the afternoon, his burden was strangely lifted, and the Lord gave him assurance that the colony would be spared. In the meantime, the colony was filled with dread and despair... But nothing happened.

In fact, two months later, word arrived that Charles II had mysteriously died after an apoplectic seizure, that James II had succeeded him to the throne, and that "Bloody" Kirk and his army was not coming after all. Joy replaced all the dread. And Pastor Mather got caught up in it as well, but he noticed something very interesting. When he worked back the date of the Kings death, he found that it was the same day that he had shut himself up to fast and pray for deliverance.

Increase Mather's courage and faith are a lost episode in American history.

Prayer: Father, we are grateful for this Patriot Pastor, who led the people to resist tyranny and who prayed fervently for deliverance, which you graciously granted. Raise up pastors like that in our day, we pray in Jesus' Name, Amen.

God has authority over all things. When he hears and answers our prayers, he often responds with answers that are "outside the box," outside the framework of how we were hoping or expecting him to answer. That is true for our personal prayers and prayers pertaining to leaders and nations. God is not the author of confusion among his people (1 Cor 14:33). He is a God of peace and order, and he sends confusion only to undo his enemies. The confusion that is now being intentionally injected into American society (spiritual, moral, social, etc.) is generated not by God but by the devil. God instructs us to pray for our leaders so that we might have peaceful and quiet lives in all godliness and holiness (1 Tim 2:1-2).

The bitterness, anger, hostility, lies, etc. that have energized so much of the media and American politics during the last few years are motivated by forces of darkness, not light. They are not intended to edify, promote righteousness or even healing, but to tear down (Jas 1:19-21). Our nation is in great crisis because of our departure from God through our disobedience and sin. We have not fought for his honor and glory as we ought. As a nation, we have not only left God out of our affairs, but also pushed him out of our schools and institutions. The political war we are in is not just over whether God will be consulted but whether he is welcome in our public affairs at all. This nation's foundations and freedoms are built upon God our Creator, ultimately our Supreme Judge, and the unalienable rights with which he has endowed us. All those rights will dissolve unless we turn back to him. This is what America must choose: God or anarchy. We are seeing our choices laid plainly before us.

Let us take our place in The Return on September 26 in Washington, D.C. and in the voting booth on November 3 (or in advance in early voting or however best to assure that your vote counts in your state and jurisdiction). And let us be given to prayer like we have never been given in our lives -- to fasting, family prayer, and group prayer. We are in a war for everything we've got -- our lives, our families, our homes, our heritage, our freedom. This is not hyperbole. It is the point to which we have come. Repentance and prayer must undergird our actions as citizens, our letters to the editor, our conversations with friends and neighbors, and our votes must count!

Marxism Under Any Other Name -- One of the reasons confusion has become so profound in our country is that advocates of Marxism, who for years have been using front groups to indoctrinate Americans, are aggressively infiltrating academia, business, government, and each of the "seven mountains of culture." They have especially infiltrated disaffected minority groups and are making league with other groups that do the same. The term "community organizers" may come to mind. But strangely, one of those target communities has been the U.S. government bureaucracy. We have prayed over the Black Lives Matter organization's leadership and highlighted their Marxist origins and ongoing commitment to Marxism. The BLM organization has enlisted millions of well-meaning African American citizens to follow its leadership, using instances of police brutality to rally support for their Marxist cause. Many are unaware of BLM's Marxist goals of dismantling the nuclear family and promoting political Marxism and anti-biblical sexual practices. For years, U.S. government agencies have been promoting left-leaning propaganda groups into their offices to hold voluntary and involuntary employee meetings in which they are systematically subjected to subtle and not-so-subtle indoctrination. LGBT groups have become so entrenched that June is celebrated as LGBT Pride Month in many if not most government installations and agencies. Now, the same is happening with the BLM brand. In his must-read article, Trump Puts Fed Wokeness to Sleep, Tony Perkins writes, "Americans face a critical juncture in the 2020 election. Openly Marxist forces in our schools, our media, our government, and our streets, threaten to destroy the liberties we prize. While most career politicians apologize and flip-flop at the first sign of conflict, President Trump is one of only a few public leaders who has demonstrated the courage to stand up to them."

Big Tech Censors Hit FRC -- CBN News broke the story of FRC being struck by an act of blatant censorship on last Wednesday night just as we were about to air our PRAY VOTE STAND livestream production. Tony said this week, "Last Wednesday, one hour before we were going to go live with our policy-focused broadcast, suddenly FRC couldn't inform partners like you via text." MobileCause's CEO Victor Limongelli sent an email terminating Family Research Council's contract. The reason? They dropped us based upon our religious views; simply because we stand for biblical truth on the issues of the day. This is a stunning incident of big tech censorship and religious discrimination, pure and simple.With no time to implement a back-up plan, FRC was prevented from sending out text invitations to tens of thousands of our followers to join the broadcast.

Please join us in THE RETURN, the Values Voter Summit, and in our special Pray Vote Stand effort during this season. And thanks, as always, for praying!